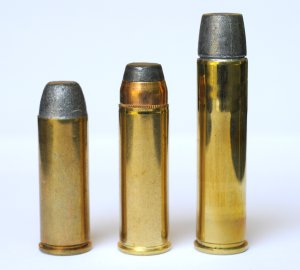 This new magnum caliber is great for us who have lots of .45 Colt ammo (I reload for cowboy shooting, but want a gun that can handle everything up to this monster magnum with very heavy lead bullets moving out at speeds in the 1300-1500 fps range.) My lighter .45 colt loads recoil about the same or less as a .38 special in this heavy gun and are good to shoot for target practice. You can shoot the .454 Casull in this gun also. So anything from .45 Colt, .454 Casull to the .460 S&W Magnum will shoot in the revolver just fine. And with adjustments, you can use dies from your .45 Colt to reload the .460 (of course you can’t full length resize the case and the decapper might not work) but the case mouth belling and the bullet seater & crimper can be adjusted in the press to work. The shell holder is tight using the .45 colt for the .460, and it’s best to get a holder made for the .460 since the rim is a hair larger. Personally, I prefer to spend $25 to $40 to buy a full new set for this caliber and shell holder. The shell holder I got from Hornady is a #46.

A lead GC bullet (from LeadHeads Bullets of St. John, KS) are good for home brew loads. Most loads below use CPB (Cast Performance Bullets).

(Note: Shown on this page are START and MAXIMUM loads. Do NOT reduce below START or exceed MAX except at your own risk.)
(See note on Powders below or read all about various Powders.)
Bullet size is .451″ (jacketed) in diameter or .452 lead (and some jacketed). Use LARGE RIFLE primers in cases. Make sure primer does not go in too far (if you accidently used large pistol).

Due to different barrel lengths, type of bullet, seating depth, primer brand and other factors, you may not get near the FPS charted. It is just a guide and the reason you should start 10% under these charges and work up.
SOME ARE MAXIMUM LOADS! – NOTE, powder companies sometimes reduced some of these hot and maximum loads after these figures were posted. You might check current loads from powder company before loading maximum loads. The loads that produce velocities below 950 fps, are very nice, mild shooting, lower recoil rounds. Trail Boss is a great, low velocity, very bulky powder for this big boy that I have been shooting in my .45 Colt loads for some time. These are VERY mild in this big gun, and less than half the maximum pressures of the high velocity loads.

I have experimented using the cheap .45 long colt case, and you will see a few of these loads noted below. I tried to extrapolate loads that would be like a .38 special Plus-P, in the .45 colt case. Also the .454 Casull cases are easier to find and are stronger than .45 colt to experiment in the .460. Do NOT use a .460 load in anything but a .460 case.

(these are personal loads with cowboy bullets for easy target shooting)

Loads for the .460S&W Magnum direct from Hodgdon

Trail Boss is great for lead bullet loads at low velocities. It’s quite bulky and will fill the case beyond half full for most loads (making a double charge evident if it happened).

Accurate (XMP)5744 is one of my favorite powders that I use in my .45 Colt and other calibers. It seems to be less “case position sensitive” than others I have used. And only a few more grains (to MAX) is a compressed load, so it uses a lot of the case space.

I have used Titegroup & Lil’ Gun and I like them a lot. Tightgroup is a very light powder for its bulk, so it fills the case about 3/4 when seating a big lead GC bullet.

Just started using some Ramshot powders, and the “Enforcer” seems ideal for this caliber.

UNIQUE (more later) – Using around 10-12 grains for bullets from 240 grain, plain base, thru 440 grain (lead, gas check), were mild loads and the spread was quite good for loads tested above. Quite a difference in velocity with bullet weight (see tables above).